It’s been a while since I could tell you all that I’ve had a new fiction piece published, but voilà! My kinda-meta flash piece “Origin Story” is now up at Terraform. Have a look!

What else is happening? Well, a bunch of stuff, actually. The big one is that I’ve finished my dissertation (to the extent such a thing can ever be finished) and my defense is set for May 21st. Yes, the long, grueling saga of graduate school is almost over and I think I’m getting out alive. And with a doctorate. You can call me doctor! I promise not to attempt any tracheotomies.

After the defense, I’m heading back to the Bread Loaf Translators Workshop, where I’m looking forward to hanging out with a bunch of awesome translators and getting their feedback on my translation of Antoine Volodine’s Alto Solo.

And in other news, I’ve recently had a short story accepted to Asimov’s Science Fiction magazine!

And the sun is out! In Minneapolis! In May!

And the May Day Parade is this Sunday! Happy May Day, everybody! Happy Spring, and happy reading.

Image swiped from Terraform. Not sure of the illustrator’s name but I like it.

On this website I tend to focus on my fiction, but normally my academic self is much more evident than my fiction-writing self. When I meet people, I tell them: I’m a grad student; I teach French. In addition to my current research on body-swapping narratives, I spread the gospel truth that Jules Verne was in fact French and wrote in French (you’d be surprised how many people are surprised), and that Les Mains d’Orlac by Maurice Renard is the real basis for The Simpsons Halloween XI story “Hell Toupée.” Like, intellectual stuff, dude. And this month, it happens I’ve had two academic publications, so let’s unfurl that nerd flag with pride.

In this article I give the proverbial academic finger to the fortress of Anglophone science fiction and argue for le merveilleux scientifique as a separate movement in speculative fiction that drew on parapsychology and spiritism as well as the branches of science that we more readily accept as science today. It’s peer reviewed, even! Here’s the Reviewer #1 guarantee:

Second! Back in November 2012, I attended the first ever conference dedicated solely to French and Francophone science fiction ever held in North America, kindly organized and hosted at the University of Regina. Alas, not everyone can attend these things, but we know you wish you could, so the conference organizers have published the presented essays in this fabulous collection: 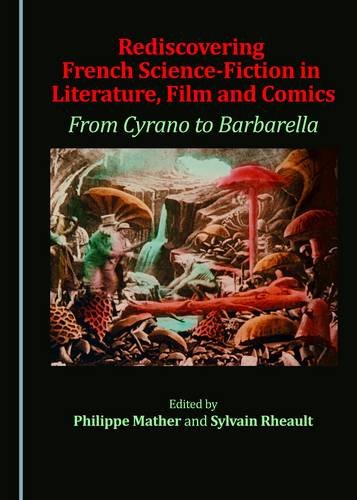 My essay is on “The Challenge of the Invisible in Maurice Renard’s Le Péril bleu,” that being a pretty great novel in which an invisible menace is swiping people and animals off the face of the earth in Bugey. How do you see the truth of what’s happening when you’re trapped by your pathetic human senses?! Well, that is what (I claim) the novel is all about.

It is a sad fact that scholarly publications are hard to get for people who do not have access to a university library. If anyone out there is not so blessed and wants to read this stuff, shoot me a message and I’ll see what I can do.

So there, look how academic I am! How smart, how sophisticated, how very soignée! And now, to dispel all such notions, here is me at the Conference for French Science Fiction, discussing my deep thoughts about superpowers and life on the space station.

It’s the time of year when people run around (figuratively, virtually) blaring out how they and their stuff are eligible for this or that award. By “this or that” I mean the Hugos and the Campbell and the Nebulas, and maybe some other stuff I don’t know about. Despite my mild covert narcissism I felt somewhat disinclined to engage in the practice, because I think I’m about as likely to receive the Campbell tiara as I am to inherit Queen Elizabeth II’s heaviest hat. So why not at least pretend to be aloof and dignified about it? But my glorious SFWA overlord Cat Rambo recommends I do this, and my name got on that Campbell list at Writertopia somehow, so fine. Twist my damn arm.

If you, dear sweet reader, are considering whom to nominate for the Campbell award, I had my first pro publications this year and am thus in my first year of eligibility. If you are thinking about the Hugos or the Nebulas, I had two stories published last year that I’d call SFF and would be eligible, and that got at least one positive review. They are:

Pretty impressive, eh? I thought so, anyway, which is why I took this picture: Look, world! I’m industrious! Well, I’ll confess, that thick monster of a book underneath La Chambre claire is actually The Nordic Cookbook by Magnus Nilsson rather than some academic beasty. I made the pinaattiohukaiset (a.k.a. spinach pancakes) and some meatballs, both of which were good, and made me feel all warm and Minnesotan inside. That’s Romeo on the couch. He thinks walking is way more fun than staring at a computer screen, and he is right. Except when it’s -10 degrees, which I think it was on the day I took this picture.

I have been working away at the ol’ diss, which means all kinds of innocent, well-intentioned people have asked me things like, “So what are you working on lately?” and then I start rambling about daguerreotypes and spiritism and body swapping, and how I really wish there were a better term than body swapping, I thought metempsychosis maybe but no, that’s different, and yeah, I’m writing about Gautier’s Avatar right now, oh it sounds interesting but actually it’s pretty terrible, ha ha, never never read Gautier unless you have to, except it’s useful, yeah…

So it’s probably a good thing I’ve started teaching again, which means I’m forced to try to express myself in a clear and accessible manner for at least fifty minutes a day.

It’s difficult for me to write both fiction and non-fiction in the same 24-hour period—they work related, if not the same, brain bits, I guess, and those can only generate so much intelligent verbiage per day. I’ve got a few different fiction-stews on the backburner and once this chapter gets done, I will get them bubbling and add salt and butter and see what I can serve up. But for the moment, it’s me and Gautier and Barthes and Kardec in a bizarre and debilitating mindmeld from which only one of us will emerge, and I’m the only one still alive so shit, it better be me.

3. The Future (is full of big stunted butterflies)

Despite all the dissertating, I managed to write a few things last year and at least two of them are going to burst gloriously from the chrysalis of my skull into the world and I am predictably very excited about them. The short story “Skills to Keep the Devil in His Place”—which a couple readers may recognize as the piece from which I read an excerpt at the Midwestern Gothic reading in September—will appear in the always gorgeous Shimmer magazine. A short, creepy fictional monologue about rats and secrets is also forthcoming at Pseudopod, and I am really excited to hear someone read it aloud as a podcast.

Crossing my fingers for more good news, and I’ll let you know if there is some.