Here’s the yearly roundup around Thanksgiving, as usual, adorned with my annual attempt at pie.

Fiction and translation news in brief:

I had a few publications this year:

— “Rena in the Desert” reappeared in audio version at Escape Pod, in episode 830

— In translation, I translated “Shaggå of the Painfully Infinite Sky,” by Antoine Volodine, and “Death of the King,” by Marie Cosnay for Palais 34, October, 2022. Palais is the magazine of the Palais de Tokyo museum in Paris, and this issue accompanies their current exhibit, Shéhérazade, la nuit.

I’ve also had some work for private clients, which is always a great learning experience.

If you wanna hear about my life:

On a Sunday in early October last year, I went for a run and found myself watching the Twin Cities Marathon; I live near the course where it follows the Mississippi river for a few miles. Around mid-to-late morning, you don’t see the elite runners, or even the whip-thin hardcore enthusiasts; it’s more first-timers and oldsters and all kinds of people spread out down River Road, all chugging along on their own individual journeys. And I thought to myself, Next year I’m gonna run the marathon. And I’m gonna write a book.

One of these was relatively simple. I downloaded a plan and kinda followed it. My husband and I both registered for the race, we trained for months, then picked up our bibs and swag. On October 2nd we showed up at the appointed time and place, and off we went, along with nine thousand or so other people. I chugged along for five hours, taking in water and energy gels when appropriate, and I’m not saying it was easy, because in fact it was really pretty hard. The stretch of the course near my house includes miles 16-19, and they are sunny and hot and very tiring—fortunately my in-laws appeared and cheered for me—and next come the final seven miles, over the hillier section in Saint Paul. I jogged the miles between water stations, where I walked and drank, until I got to the last water station, and then my dad and brother were there to cheer me on, and I had one mile left, mostly downhill. It was hard. But it was simple, and I did it.

Writing a book—in a sense, I did write a book. I translated one. Manuela Draeger’s Kree is currently in draft form, but it is a complete draft. The first draft of a translation is also rather a simple accomplishment: just keep going and going and going until it’s done. Revisions are more difficult, more complicated, and there’s a lot of those coming. But the first draft process was pretty simple, and I did it.

Of course, gonna write a book meant my own book, an original novel by me, and that did not happen. Other things did. The major thing, the most mentally consuming and difficult thing, is that my mother went from “needing some help” to dementia diagnosis to assisted living and then to a memory care unit, over the course of about nine months. Without going into a ton of detail, I will say that 2022 has been among the worst years of my life so far due to that particularly shitty emotional roller coaster, and there is nothing simple about any of it.

Some people manage to write through such experiences; they transmute their suffering into art, maybe, or they escape into a world of fantasy, or they plumb the depths of honesty and come up with something inspiring, or hey, why not all three. As for me, I stare at the blank page, type a few words that look like an obvious metaphor for what I’m feeling, and I start thinking about the bills and the practical needs and the last awful or sad or psychotic thing my mother said to me, and somehow the few words just don’t turn into a story.

Good things happened, too. We got a dog, who came to us wild and terrified, and has gradually become fun, affectionate, and sweet. She encourages us to run and play and be crazy, and someday we hope she’ll learn that displays of affection need not involve jumping, clawing, or teeth. We went camping, we went to the lake. A few fun projects came up, a few things got published. We got to meet our tiny and beautiful new niece.

Next year will be better, maybe. Or maybe it will be worse. I’ll get deep into revisions for Kree. I’m planning to run another marathon or two—Grandma’s in June, Twin Cities in October. I’m planning to write a book. But sometimes the world has shit in store for us. So we’ll see.

I have been in graduate school for twelve years. Two years for my Masters, one year in Paris, two more years of coursework, about three years of floundering and having a midlife crisis and trying to figure out what the hell to do with myself,* and about four of really writing. I have learned a lot, traveled a lot, and gotten a lot out of the experience. But now, finally, I am pleased to tell you all that I have completed and successfully defended my dissertation, and that means, well, I’m done. I have a PhD. You can call me doctor.

My dissertation is titled “Imagining Bodies: Technological Visions of Displaced Minds in French Speculative Fiction.” It is about how different media show us the body in different ways, and it examines novels that involve body-swapping and out-of-body travel: Théophile Gautier’s Avatar, Villiers de l’Isle-Adam’s L’Ève future, Camille Marbo’s Le Survivant, Maurice Renard’s Le Docteur Lerne, sous-dieu, Blaise Cendrars’s Moravagine, and Marguerite Berthet’s L’Ascète du Mont-Mérou. It probably won’t be publicly available for a couple years, but if you’re interested you can contact me and I’ll probably be so flattered that I’ll send you a copy within minutes.

What’s next? Bread Loaf Translators Workshop, to get feedback on my translation of Antoine Volodine’s Alto Solo. I have some summer work lined up in addition to that revision. I have some good short fiction news, but I should probably wait until I have the contract signed to announce it. Details to come.

Look, here is me, having a PhD!

Just because I have a PhD doesn’t mean I can’t look goofy. In front of my intellectual home, Folwell Hall at the University of Minnesota, post-defense, yesterday. Photo by Mr. Jeffrey Mitchell

*What was this all about? Well, I began grad school with the idea I would become a professor. That’s what PhD programs in the humanities do: they train you to do research, but the goal is to get a job as a professor. As I progressed through school, however, some things became apparent to me: a) Being a professor requires a ton of work and commitment, which would not leave me much time to write fiction, something that is important to me. b) Teaching isn’t my favorite thing. I don’t dislike it—I taught last semester and actually really enjoyed it—but it takes a lot out of me, and if I had to teach 3-4 classes a semester I would crumble away into dust. c) The academic job market is ridiculously tough. People do get jobs as professors—some of them, anyway—but often after a post-doc or two. So you move to wherever you get a job, probably cross country, possibly more than once. Goodbye beautiful and beloved Minneapolis, in that case.

In short, becoming a professor would have required sacrifices I didn’t want to make— even if I could get a tenure-track job, I probably wouldn’t be happy in it. But there I was in a PhD program, without a very clear idea of what else I could do, or really wanted to do. So—not consciously, I don’t think—I slowed the hell down. I got myself a therapist. I started exploring other options when I could—translation, editing, publishing. And it was pretty hard at times but I think, now, that time was necessary, and I feel good about where I’m headed.

Having begun a tradition of writing an annual update that attempts to work up some kind of metaphor for my work and life out of the construction of an apple pie, I suppose I should continue it. I almost didn’t, because what is there to report, really, but then Jeff took this picture and it seemed like I should use it. So here’s me, pre-shower in my PJs, making pies: 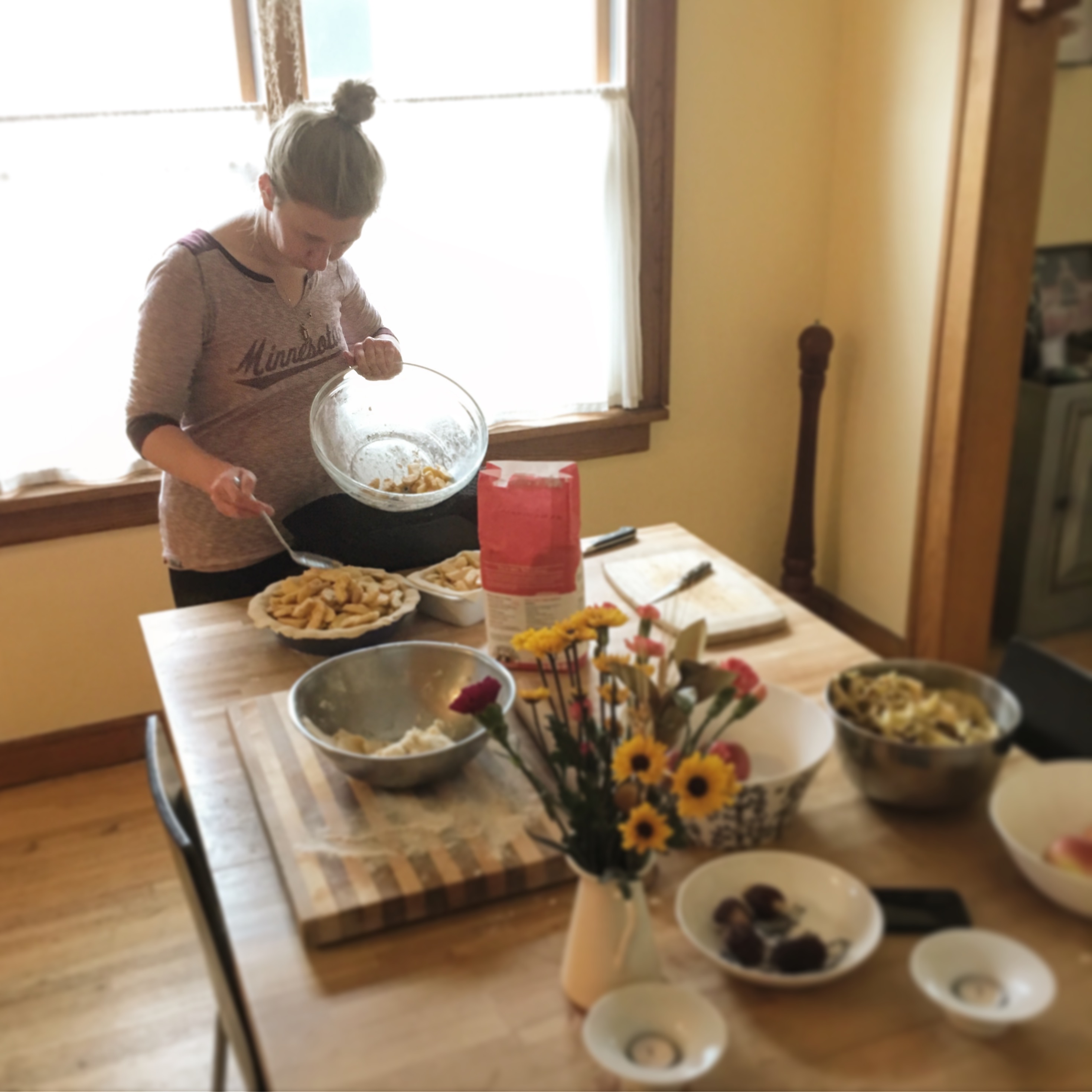 Photo by Mr. Jeffrey Mitchell. Yes, that is an enormous pepper grinder. Yes, we use it, for white pepper. It’s called the Everest. The Everest of pepper grinders. It was a gift.

It’s been a rough year in some ways, and especially for the production of fiction. I have worked on some fiction pieces, but either I haven’t finished them or I haven’t sold them yet.

But I’ve been writing a lot of other stuff. I finished another chapter of my dissertation—the final one—last summer, and I am close to finishing the introduction. After which I will send the whole thing out to my committee, get their comments, revise accordingly, write a conclusion in a 3 a.m. burst of panic (I’m told that’s how it’s always done), and defend the bastard. That should happen in Spring.

I’ve also been doing some translation work. Survival of the Fireflies came out. I translated another essay by Georges Didi-Huberman, titled “Light Against Light,” which is on similar themes of individual experience/art versus propaganda, fame versus infamy, the light we emit, the lights that blind us. That was published in Alienocene, as was Frédéric Neyrat’s essay (translated by me), “Ascent in Freefall.” This is a discussion of Patricio Gúzman’s beautiful film Nostalgia for the Light, a meditation on history, temporality and the Atacama desert. And in an entirely different genre, I’ve been doing some work for L’Officiel magazine.

So I’ve been busy, and believe me I’m getting my ten million hours of practice in. Makes perfect, so I hear. I’ve gotten way better at making pies, after all: 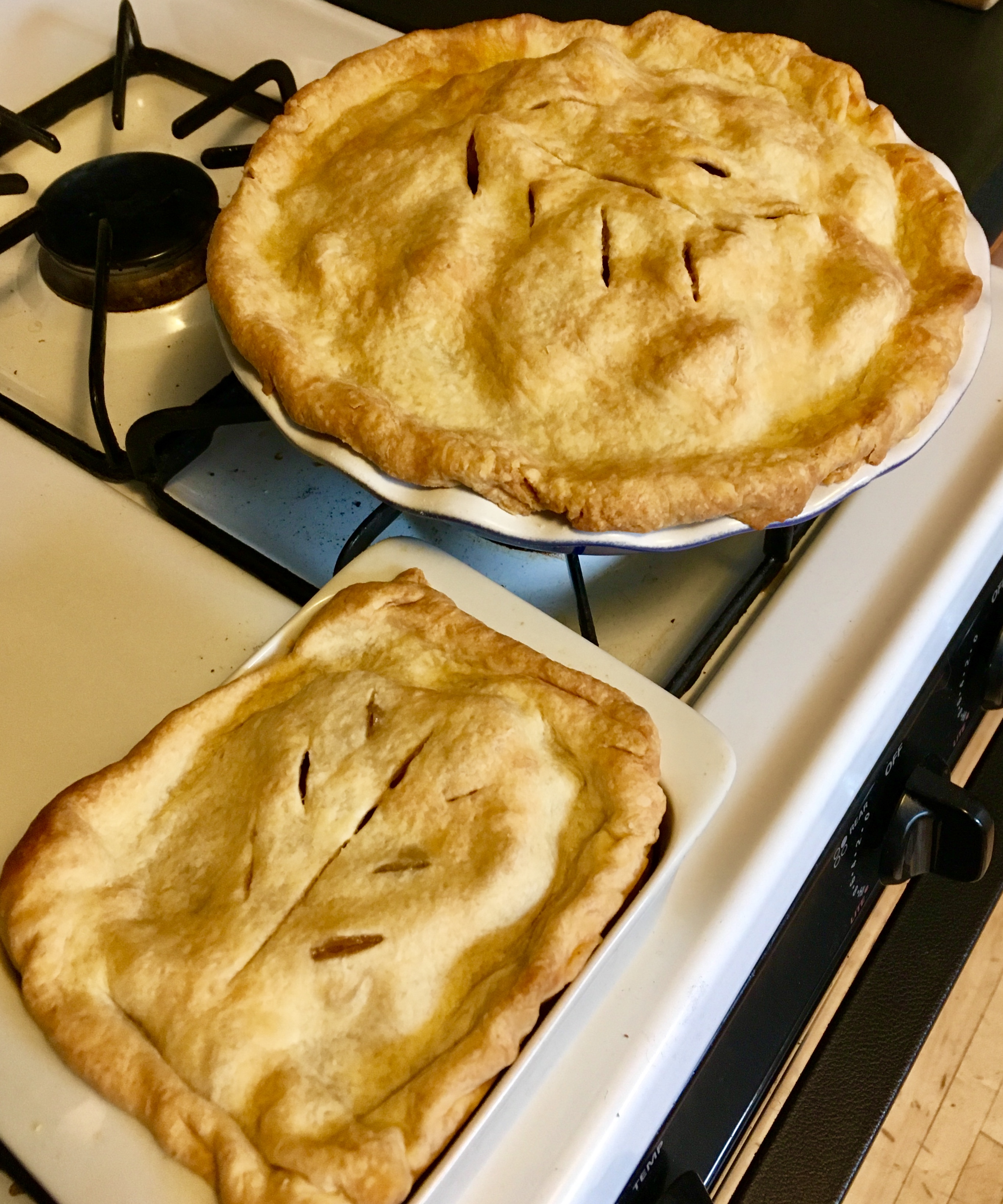 See? Not falling apart at all! Credit to Jeff for rolling out the top crusts.

Look for fiction production levels to ramp up once the godawful dissertation is done.

In the meantime, happy Thanksgiving to everyone! Hug your people, hug your dogs, don’t hug your cats ’cause they don’t like it but pet them gently. In short: appropriate displays of affection to all, and to all a good day, and hopefully some good pie.